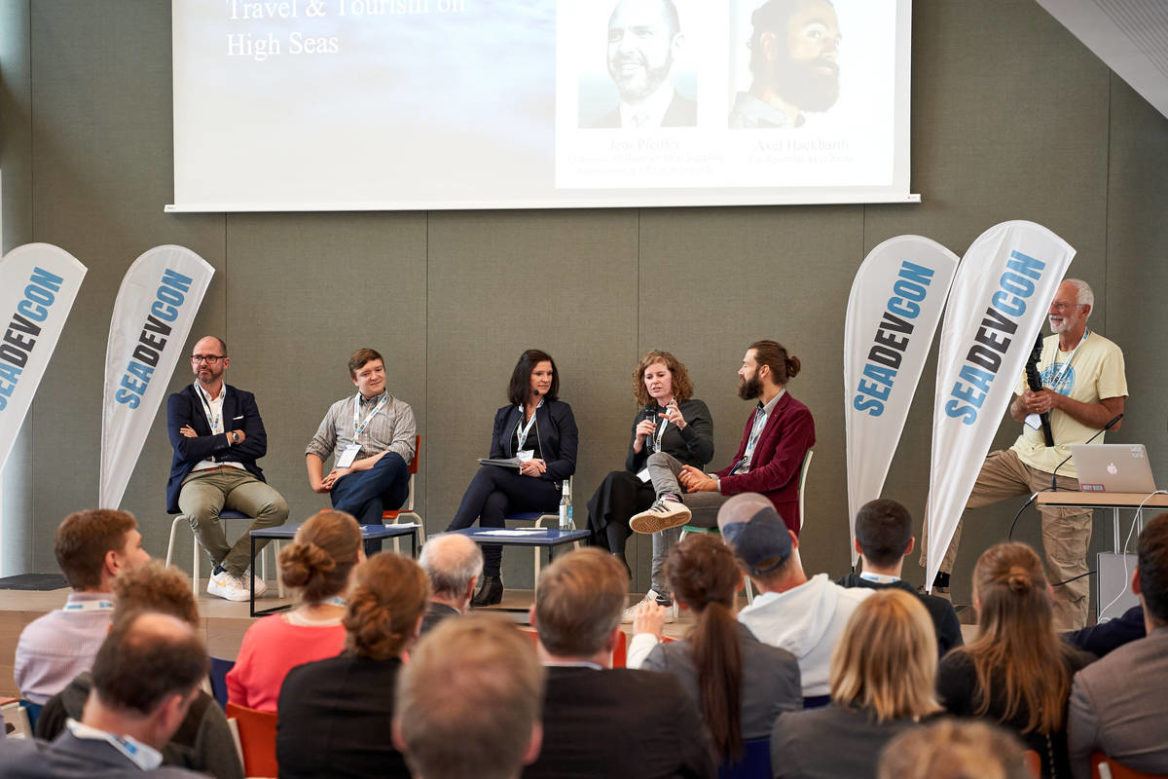 The SEADEVCON ’19 has more than matched his high expectations for the conference, sums up its founder and organizer, Carsten Bullemer: “This has clearly been the best event about sustainable shipping in Hamburg to date.”

SEADEVCON ’19 was integrated into the 11th Hamburg Climate Week and held to coincide with the Climate Week NYC 2019, run in coordination with the United Nations and the City of New York, at the end of September. Hosted by the Hamburg School of Business Administration (HSBA), SEADEVCON ‘19 brought together 250 maritime industry experts from 26 countries to present attempts at technical solutions, to discuss the future of the sector, and to look at the ports of tomorrow. The overarching topic of the two days was exploring ways to achieve “Green Shipping” – a sector to become neutral in CO2-emissions and thereby effective in fighting climate change. “The time has come for all of us involved in the maritime industry not just to seek innovative solutions, but also to implement bold initiatives,” emphasized Otto Schacht, EVP Logistics at Kühne + Nagel. 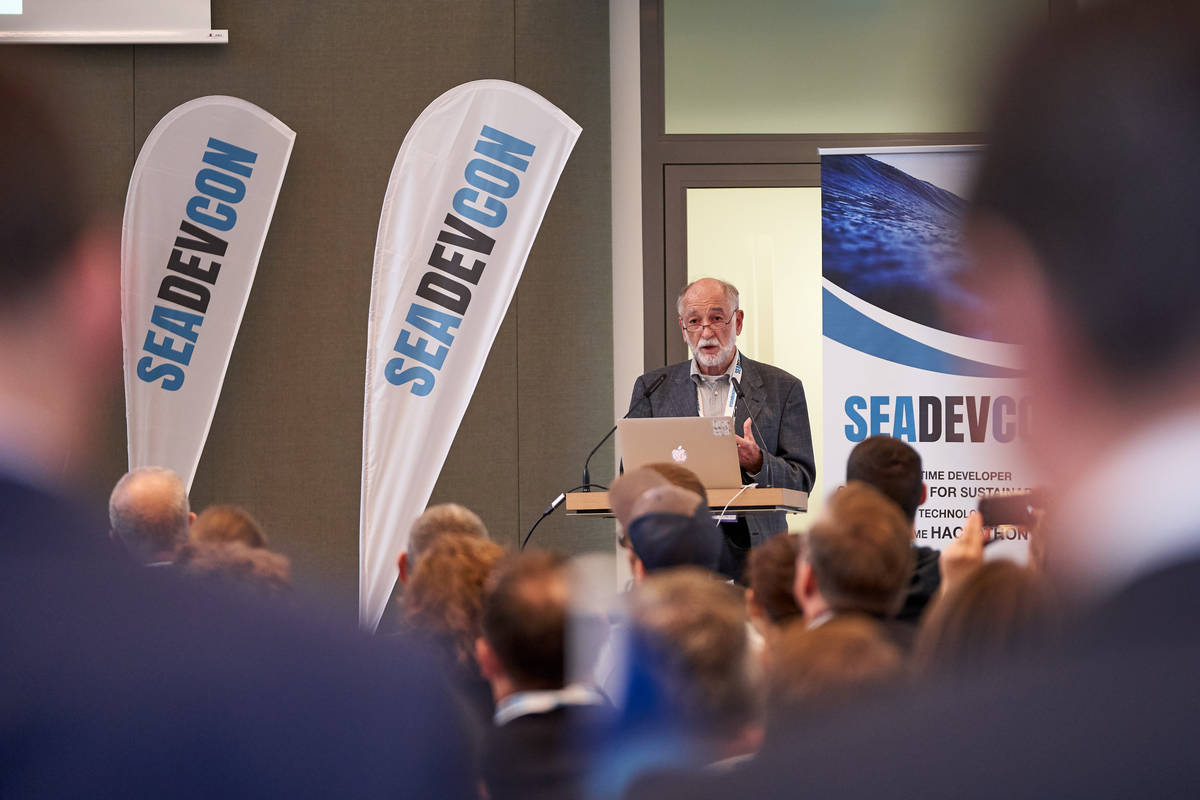 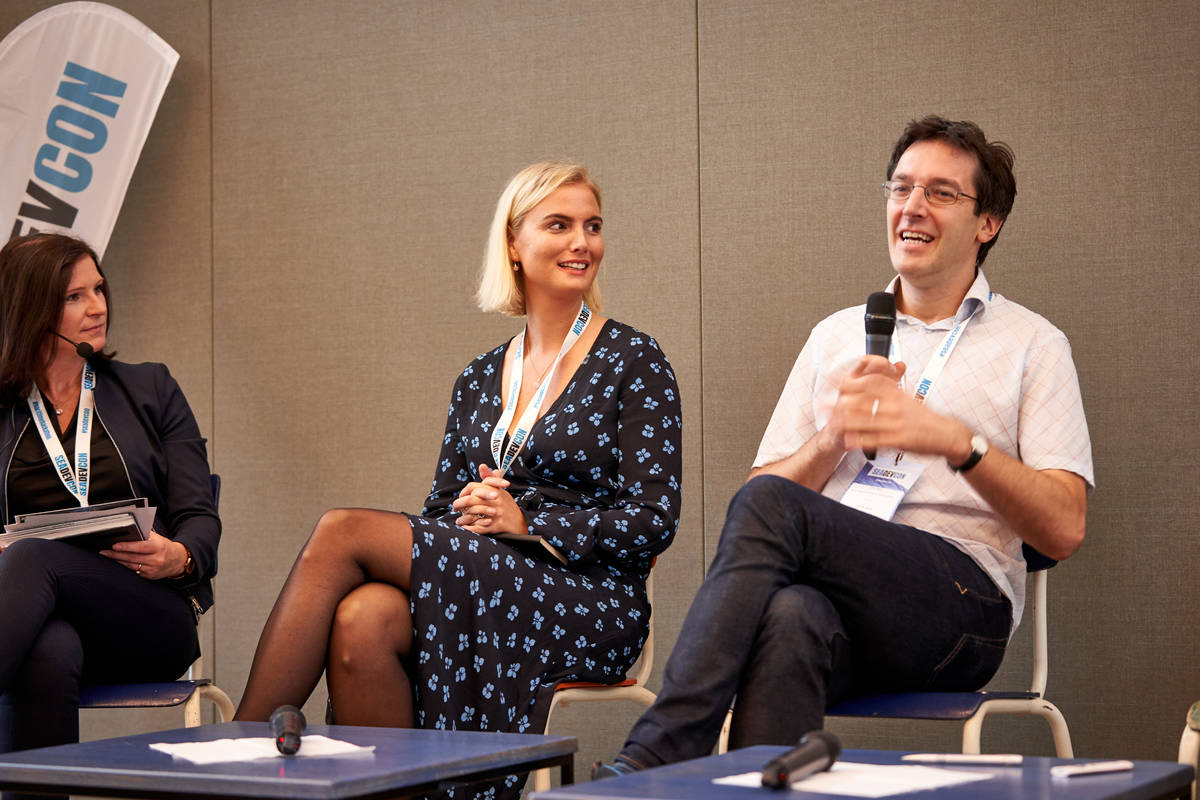 On the main Conference day, a total of 21 speakers presented their findings and discussed their views in five thought provoking panel discussions that covered various aspects of commercial shipping and maritime tourism. They included representatives from corporates, researchers and academics, developers of hard- and software technologies, as well as NGOs and environmental activists. “As a delegate of ‘Fridays for Future’ Hamburg I was glad to see that there were more than just a few people who have made it their ultimate goal to make cargo transport at sea emission free,” commented Arnaud Boehmann from his perspective.

As predicted, the presentation of the newly created SEADEVCON Maritime Award to the author and expedition leader Arved Fuchs proved to be the climactic closing of the Conference. The prize is to honor annually a personality whose “lifetime achievement is exemplary for the fight for a sustainable and respectful use of the world’s seas”. Ocean race yachtsman Boris Herrmann, patron of the Hamburg Climate Week, introduced Fuchs as his long-time idol: “As a kid, I already decided I wanted to be an adventurer like him. Nobody carries more credibility.” 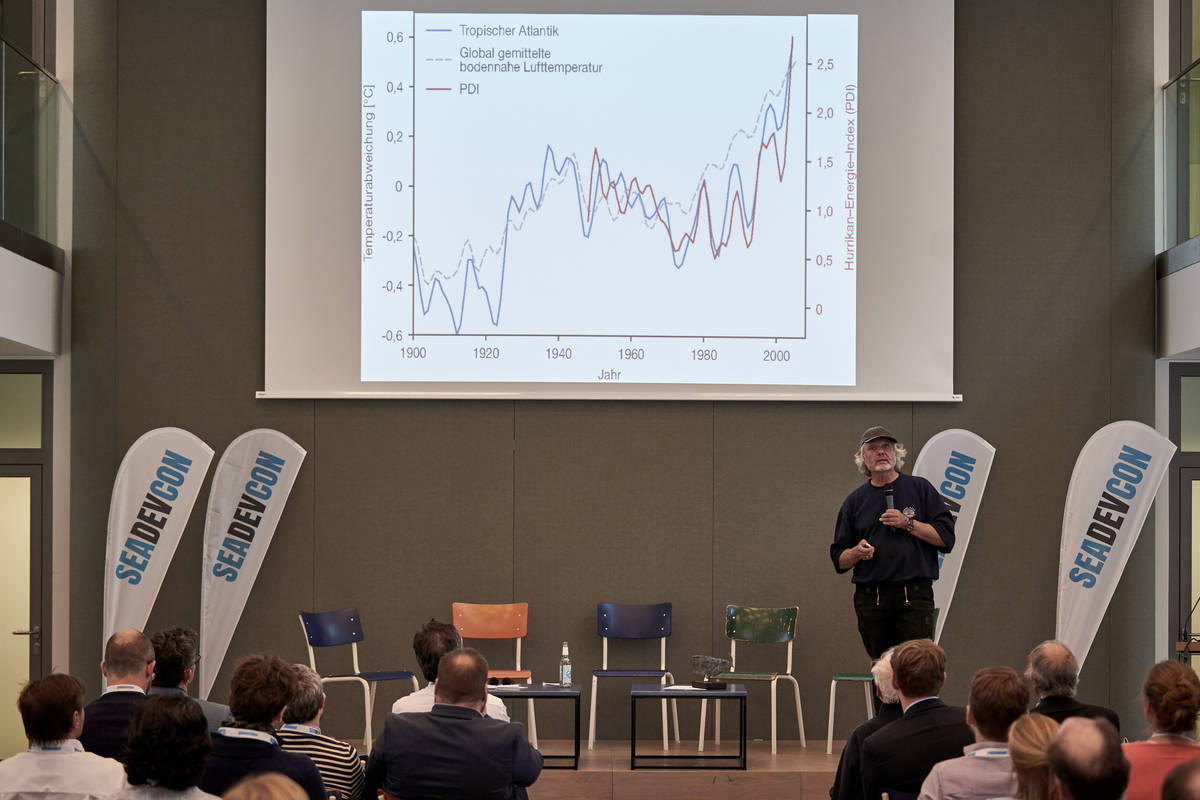 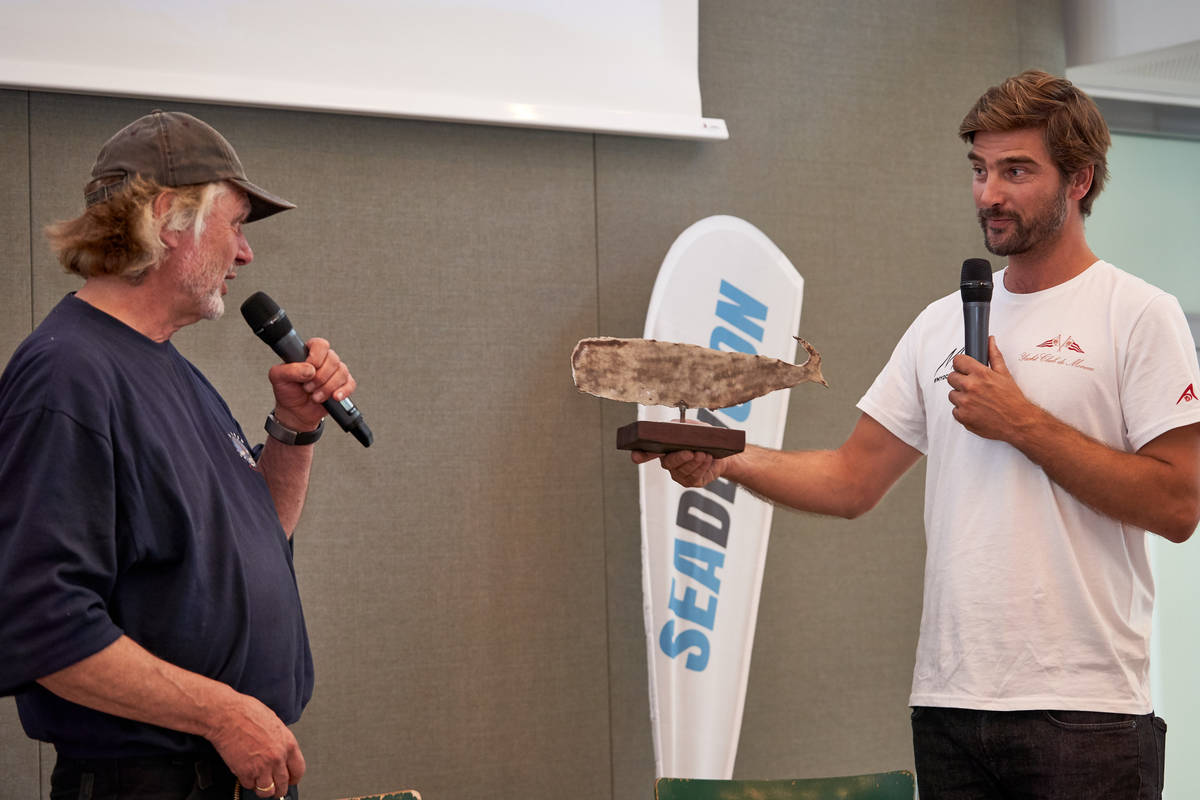 In his Keynote Address, returning straight from his “Ocean Change” voyage in the Arctic Sea, Arved Fuchs reported with a sense of urgency about mankind’s treatment of the sensitive oceanic ecosystems and the catastrophic consequences this is having on today’s global climate: “The clock is ticking. The polar ice caps are melting. Future generations will not forgive us.”

Fuchs said he felt honored to receive the SEADEVCON Maritime Award: “And I am especially pleased to see the discussion about these issues is now taking place in business and society. We can only succeed by taking decisive action now together.”

On the eve of the Conference, a stimulating Startup Night took place on board of the MS Stubnitz moored in Hamburg’s HafenCity. Nine participants from three countries presented their innovative concepts around the topic of “Green Shipping”. 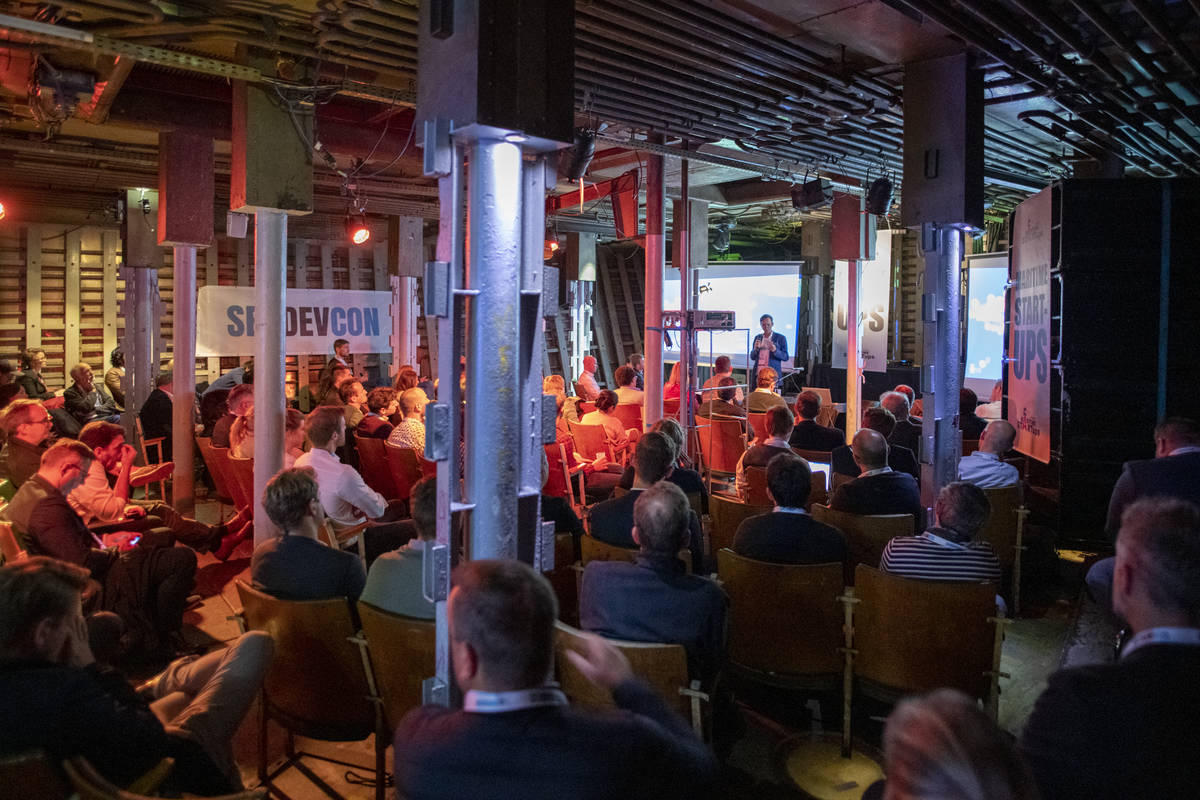 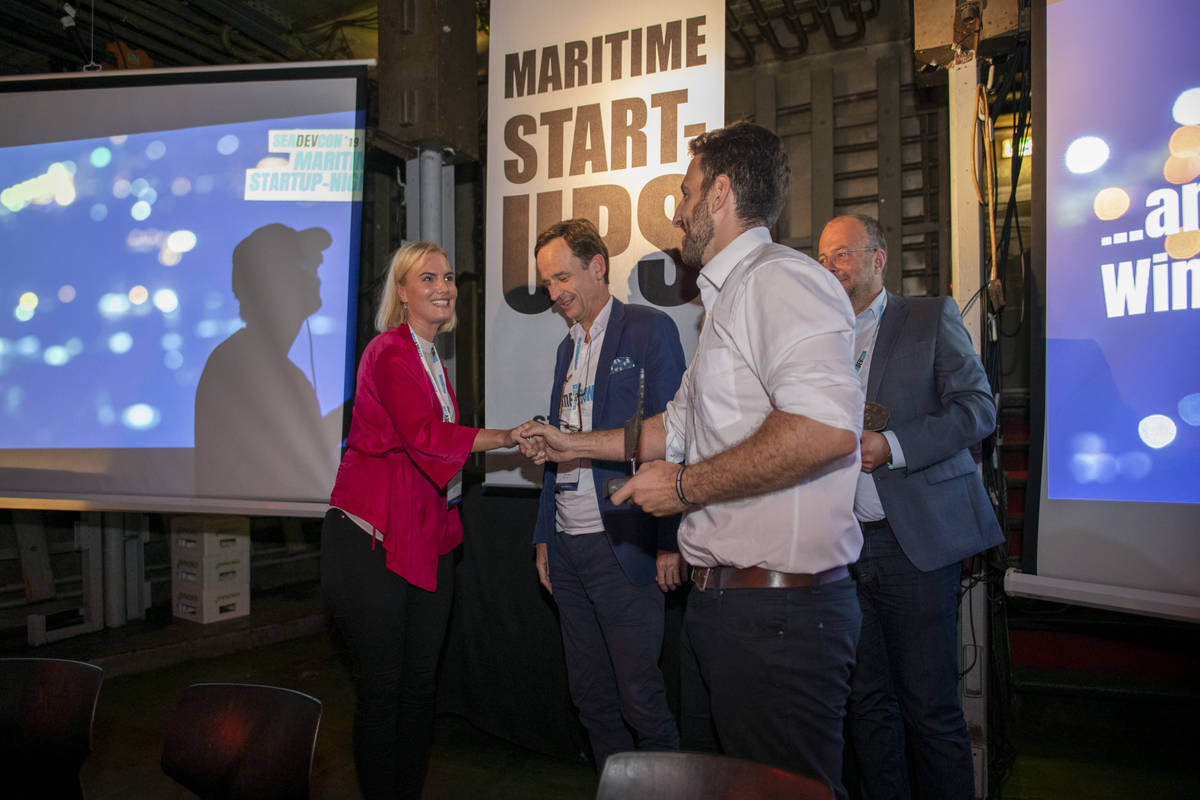 Winner in the digital category was Hawa Dawa that builds comprehensive technology stacks for monitoring air quality and green house gas emissions. Co-Founder and CEO, Karim Tarraf saw their approach confirmed: “We sense that we are bringing the right technology, team, and mindset to a fast-growing market.”

In the analogue category, HASYTEC Electronics prevailed with their development of DYNAMIC BIOFILM PROTECTION, ultrasound-based technology against marine growth and fouling on all liquid carrying surfaces. With a view to other prizes previously won, Ole Nielsen, CEO Scandinavia, took it with humor: “We are soon going to need to extend our mantelpiece.”

A special highlight was the appearance of the extreme swimmer André Wiersig, the first German to have crossed the seven sea straits known as “Ocean’s Seven”, who spoke to a full house about his motivation, hard physical and mental training, and experiences – exposed to the elemental forces, yet “with a strong connection to the water”.

Wiersig, Ambassador of the “Deutsche Meeresstiftung”: “If you have ever yourself, in the middle of the night, out there in the ocean, swum with your head into a plastic bag, you get a totally different perspective on protecting the seas.” On a lighter note, but life-saving, he had some good advice for his audience: “If you come across a shark, just look him in the eyes, kind of check each other out, keep swimming, and in the end, he will lose interest. By contrast, jellyfish really annoy me!”

The SEADEVCON ’19 has been covered widely in the print, broadcast, and online media. One report is still outstanding: The NDR 90,3 “Hamburger Hafenkonzert” will dedicate two full hours to the Conference on 3 November 2019, at 06:00 CET. The broadcast will be repeated on 5 November 2019, at 18:00 CET. Subsequently, the emission can be downloaded as a podcast from the archive. Broadcast uninterrupted since 1929, the “Hamburger Hafenkonzert” has the cachet of being the oldest regularly running radio program in the world.

A video with impressions of the SEADEVCON ’19 will be posted on the Conference website at the end of October. Carsten Bullemer summarizes: “We are encouraged by the universally positive feedback and are already beginning to plan the coming year’s event. We are striving to take it to the next level in 2020.”